‘Spiritual Hustler’ David Hans-Barker is living – and deep-breathing – proof of the power of meditation. From teenage tearaway to multi-millionaire, he’s now looking to share the secret of his success with as many people as he can.

David’s journey has not been easy. Born in Mysore, India, to a British Indian mother and a father of Jewish European descent, his earliest years were spent trapped in a cult called ‘The Children of God’, from which his mother escaped to bring up David and her three other children as a single parent in a rough area of London.

He soon fell into a life of gang-related crime and a “regressive mental cycle” from which he escaped aged 14 using a fortitude he attributes to a discovery of meditation. By age 17 he had already visualized the luxury mediation center he would one day create, and which today stands on the cliffs at Uluwatu, Bali – The Istana.

“I’d always dreamed of having a place where you could bring well-developed people together,” says David. “A place where they could connect and teach each other – a place to foster growth. To me, this place was always by the sea, but then on a mountain as well. So when I was traveling around Bali and found The Istana I immediately knew it was the place I’d seen in my imagination.”

Today YogiLab – which David established along with his fellow ‘spiritual hustlers’ Brian Kelly, Sascha Haert, Aren Bahia, and Aurimas ‘AJ” Juodka, and which runs the programs and more at The Istana – brings together the worlds of practicality and spirituality. Hence its logo featuring a yogi inside a chemical lab flask. 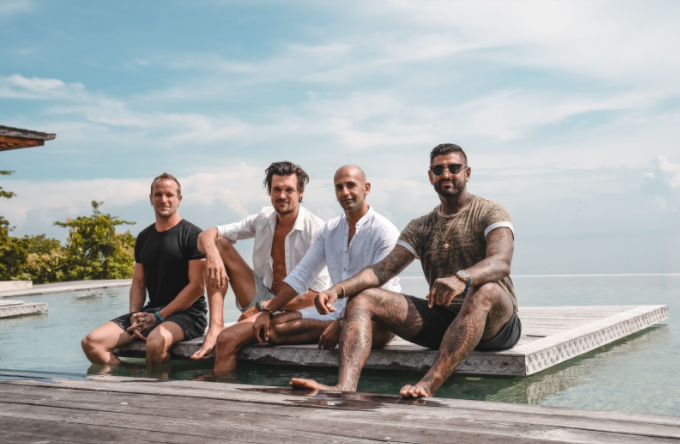 The YogiLab logo was inspired by David’s own pursuit of contentment. “I became like a mad scientist experimenting on myself. I realized I didn’t know all the answers, but I could use myself as a guinea-pig in an experiment to see what actually produces happiness.”

Each of YogiLab’s five coaches is qualified to teach entrepreneurial and spiritual development practices, as well as being successful entrepreneurs in their own right, with over 70 years of combined experience. “Don’t listen to talk from someone who’s never walked the walk,” says David.

“The whole point was to be able to create a meeting place where both billionaires and backpackers can come together. I’ve been amongst both of those circles and one of the things that surprised me most – because I grew up thinking that money was evil – was that the billionaires I met were the most conscientious people that I’d ever known.”

David has never forgotten where he came from, nor the difficulties he overcame. He was finally able to properly thank his mother for rescuing him and his siblings from the cult, and for working so hard to support them all, when he bought her a dream home in the leafy West London suburb of Ealing – not far geographically from where he grew up in Southall, but socially a long way from the streets of his youth.

“I got to buy my mum her dream house,” he says. “She’d always driven through Ealing and liked the double-fronted Edwardian places there. So I told her that my bosses had given me some properties to manage, and asked her if she’d like to have a look around. When we came back downstairs from the tour, I gave her the keys and told her it was actually her house now. She burst into tears – we’d managed to bring our whole poverty circle full cycle.”

Having achieved financial independence and becoming a millionaire at the age of 27, David Hans-Barker’s main purpose today is to give back by sharing the secrets of his success through events like The Meditation Movement Day and education initiatives like Guide Education.

While The Istana is a more luxurious option, YogiLab is today accessible to everyone – if not physically, then virtually as well. Yogilab’s Vipassana meditation offerings are now available online, with David fully affirming that without meditation he would not be where he is today. 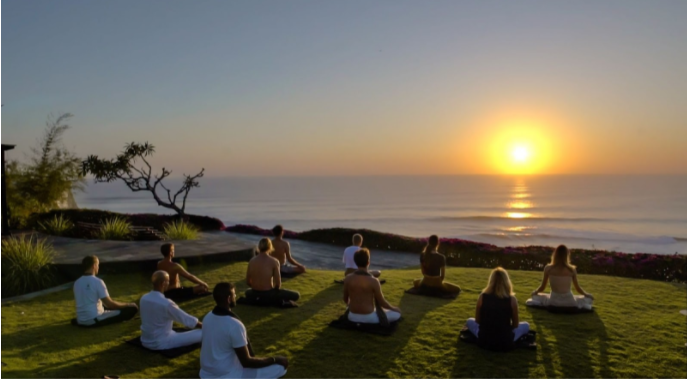 “Through deep meditation, I realized everything is just pattern recognition,” he says. “So you can use pattern recognition for market strategy in the same way you can when you’re analyzing a work of literature,” he explains, referencing his degree in Comparative Literature from the University of Kent.

The fact that he had no business background before finding success further strengthens his belief that meditation was the key to his success.

“In the same way you understand the patterns you’re built of when you deeply meditate, so I started to be able to predict market movements and to predict new business for people. That’s what allowed me to start to make money,” he says.

“If I hadn’t experienced it myself, I wouldn’t believe it was true. So what I want to do is take meditation to people as a real-world skill, not just something you do as a pastime or a hobby. It’s like, no, this is the most important skill you can work on to transform your life, bring your family out of poverty, and really make a difference. To me. It’s the thing that produces decentralization of power. And that’s why I want to give it to everyone.”